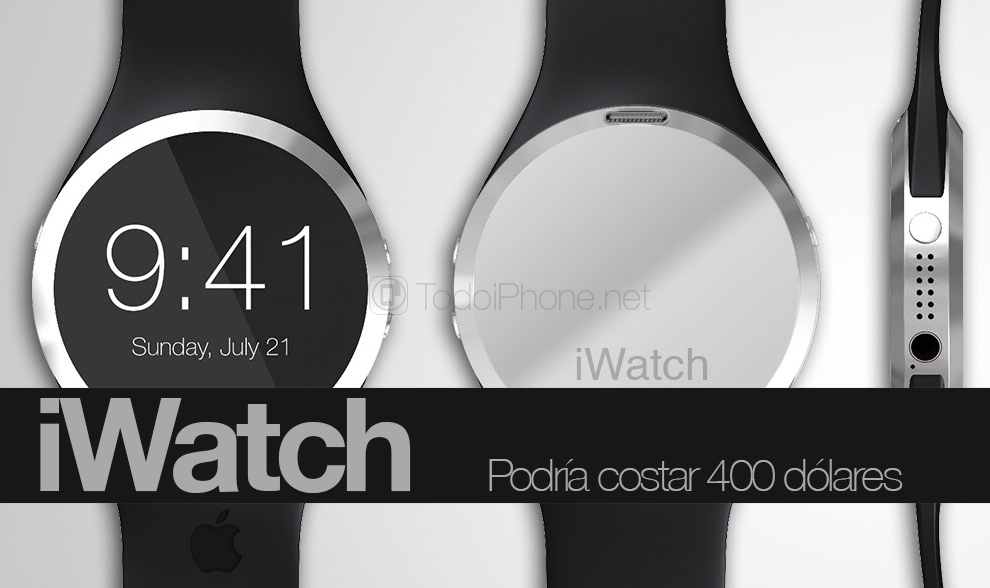 Apple I might be thinking of selling the iWatch for $ 400

Again Re / Code is pronounced again on the new devices that will introduce the giant of Cupertino next September, this time thanks to anonymous sources has said that Apple has been considering the price of your next iWatch, which could be around $ 400, in addition to being expected to be available for sale next year, 2015.

As indicated, it seems that lThe executives have been discussing the price that the new and first wereable device of the Californian firm will have, the iWatch, which could be around $ 400. Of course, this price has not yet been set for that new product, which we expect we cannot see in the market until next year. Similarly, these sources have also commented that The new device will not arrive with a fixed price but will be available in several prices for the different modelss, including lower priced versions.

The fact that the Cupertino boys are starting raising the price that the iWatch will have is a step that indicates that Apple will soon launch the product. In the case of the iPad, it was rumored that the price of this device would be about $ 1000 until Steve Jobs took the stage and astonished the world by reporting that this device would sell from $ 499.

Likewise, without even knowing what this new product of Apple, we can get an idea of ​​how much this will cost by comparing prices with the competition. Samsung, LG and, soon, Motorola have launched their devices whose prices are around 200 dollars. Other devices, such as quantifying wristbands (Jawbone UP, Nike Fuelband, Fitbit Flex, etc.) are normally priced at around $ 100. Obviously Apple is preparing high quality hardware with which you plan to improve user experience.

Nous recommandons:  Summer is over, but not the free apps for your iPhone and iPad

The iWatch could be presented on September 9

Of course, it will not be until next September 9 when Apple make the expected event at the Flint Center, where it is expected that, In addition to presenting the iWatch, the rumored 4.7-inch iPhone 6 also arrived and possibly also the largest variant, the iPhone 6 of 5.5 inches. As we know, this makes a lot of sense since the interaction between both devices will be very close.