Things shows its new extension for iOS 8 on video 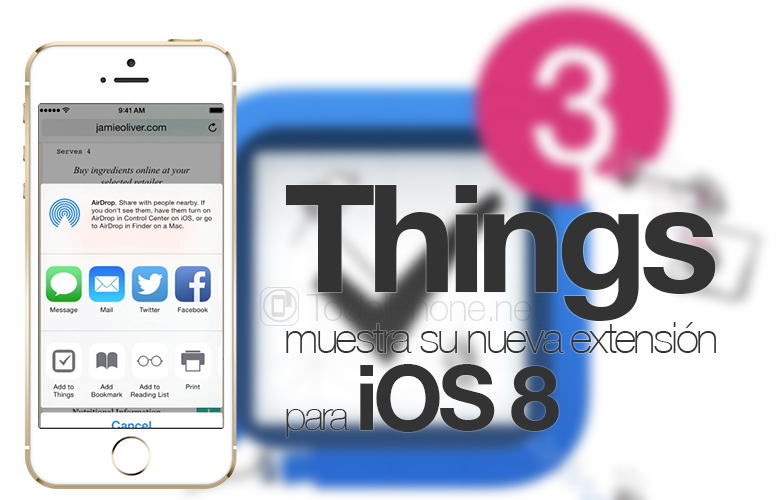 Cultured Code prepares Things for the arrival of iOS 8

The release of the final version of iOS 8 is getting closer and as expected developers have already begun to show some of the news that their apps will get when the operating system reaches our devices. Cultured Code, Things developers don't want to be left behind this time and they have shown an extension that will turn the famous task management app into something a little better.

Specifically they have created a extension to offer greater integration between the Share menu and Things. They have published a video in which you can see it in action and it really looks great.

In the example they have published and that we leave after these lines, you can See how the integration of Things works with the Share menu in Safari. The user is browsing the web of Jamie Oliver's recipes and finds a recipe that interests him. At that time select the ingredient list and click on the share button. Among the options available in the menu, the “Add to Things” option appears and when you Touchez on it a window is displayed that allows you to directly add the ingredient list as a Things task.

The Things extension for the iOS 8 video sharing menu

Thanks to this new features, Things will become a much more useful application and users can save anything as a task in practically any app in a very fast way (it will not be necessary to open Things) and easily.

September 9 (next Tuesday) Apple An event has been called in which the iPhone 6 is expected to be presented. Apple announce during the event the Exact release date of iOS 8 and everything seems to indicate that it will arrive a few days after the event as it has happened with the previous versions. It will be from that moment when developers start updating their applications and Things could be one of the first. This time they don't want to be left behind.

Things is possibly one of the task management apps based on the most famous GTD method that we can find for iPhone, iPad and Mac. It has been available for many years and its developers have not stopped improving it in all this time, although generally Updates take a long time to arrive. It seems that this time they don't want to be left behind and they have put the batteries to take advantage of the new features of iOS 8 from the beginning. If you still don't have Things, you can buy it from the following download boxes.

What do you think of this new feature of Things? Do you think it will be useful? What other improvements would you like to include?